I can’t start this week without saying that I cannot believe we are 5 episodes in and still talking about Puppy Gate. But let’s just get to it.

We start out at Kyle’s, where everyone is packing because they’re getting ready to send Sophia off to school. (She’s going to college in DC.) We are already know Kyle’s feelings about Sophia leaving from previous episodes – she’s super emotional. They talk about their plans – they’re staying at a hotel for the weekend, helping Sophia get set up, and Farrah is meeting them in DC, too, which is really nice. Kyle tells us she really doesn’t like change. I feel that.

Denise & Rinna meet up at Malibu Lagoon. (Dying at Rinna’s shirt – can I please have one!?) They talk about The Bahamas, and Denise said she loves Erika. She also said she really liked LVP – she enjoyed the time they spent together when they were getting a massage. Rinna totally bites her tongue here and just goes with the flow. They don’t stay on the Bahama Drama long – Denise tells Rinna that Aaron’s divorce is finalized, and they’re planning on getting married. Lisa Rinna is super excited for her. 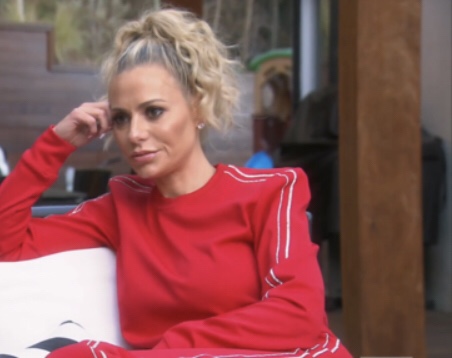 Over at The Kemsley’s, PK & Dorit are catching up. PK asks Dorit if she’s talked to LVP, to which she replies, “No.” He asks, “Not since The Bahamas?” Again, no. PK tells Dorit that LVP never called or texted him on his birthday, which isn’t like her. Dorit looks perplexed, and says that she and LVP need to “clear some things up.” 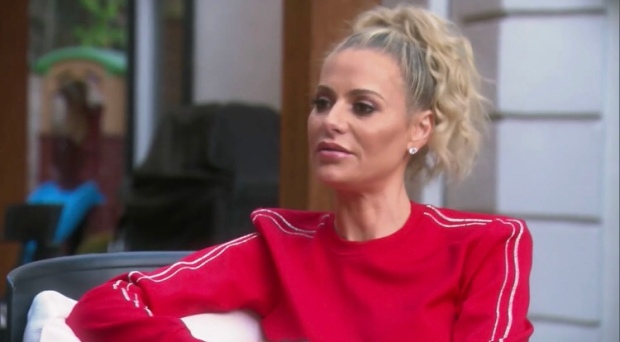 “I love her, but LVP is a genius at manipulation and control.” Those are some strong words from PK. He goes on to say, “It gets a little bit difficult for me when it’s my wife.” Dorit responds, “I would just like a little bit of honesty. If she tells me the truth we can work through it.”

I honestly find that ironic – you want the truth, yet you have yet to give us the truth in regards to Puppy Gate. Maybe LVP already knows the truth, but we, the viewers, do not. Again, the million dollar question we all want to know the answer to – why didn’t you give the dog back to Vanderpump Dogs? Or even, why didn’t you tell LVP you were giving the dog away prior to actually doing it? I’m sorry, this is so bizarre and doesn’t make sense. Wtf am I missing? 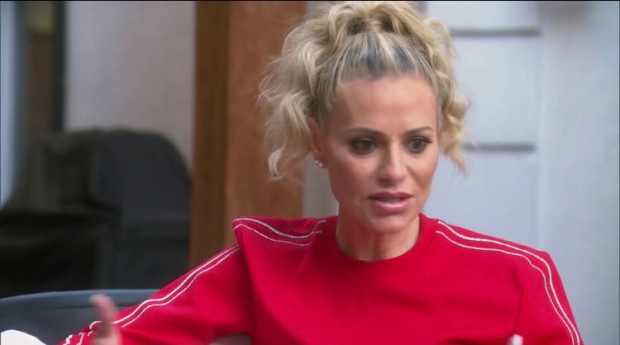 PK wants to know if there’s any scenario that Teddi is making it up, but Dorit doesn’t think so. PK states that someone is lying, and thinks that LVP owes Dorit an apology, because “she’s done nothing wrong.”

Except, Dorit did do something wrong. However, in this situation, LVP trying to set up Dorit is really fucked up. I’ve said this from Day One – if LVP was mad at Dorit, she would have every right to be, so why not just own it? This is honestly infuriating. 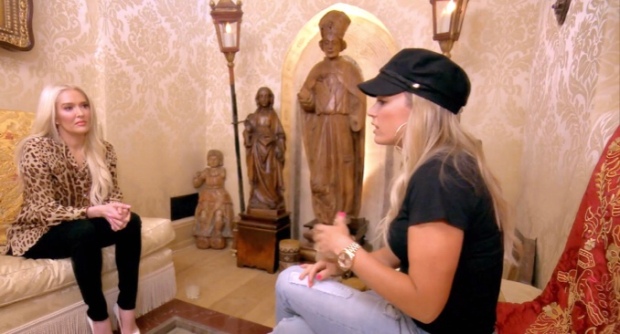 Teddi is at Erika’s (loving this friendship you guys!) and they’re rehashing Puppy Gate. (Side note: I would like a chapel in my home, and I love Erika’s leopard top. Anyway.) Erika tells us that going up against LVP shows strength, and she finds that admirable. Teddi starts from the beginning, so let’s just do this:

One month ago, Teddi & Dorit were not in a good place. Teddi tells Erika she saw Dorit out at events, and Dorit ignored her, but it was whatever. Teddi gets a call from Vanderpump Dogs, and is told all about the Lucy situation.

“This thing happened with the dog, and Lisa wanted you to know.” 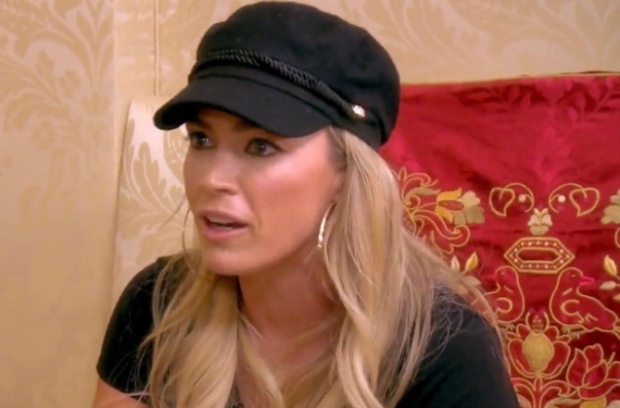 Teddi admits she had a dramatic response to it, and says, “I was kind of in it.” She admits that she wanted the tea and asked for the details. “She fed me the information – I bit.”

Teddi goes on, “Lisa Vanderpump invited me and Kyle to Vanderpump Dogs-” Erika cuts in and asks, “For what?” Teddi replies, “They wanted me to say it and I couldn’t go through with it.”

“What did she want you to go through with?” – Erika

“Telling everybody what Dorit did.” – Teddi 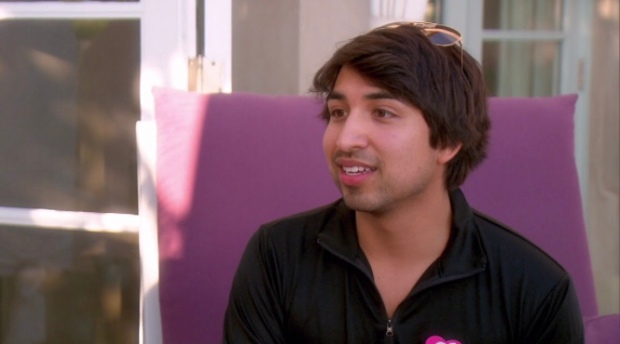 Meanwhile, at Lisa Vanderpump’s, Lisa is meeting with John Blizzard. I am beyond annoyed by this entire scene. LVP literally runs through the events, but unlike Teddi’s confession, I am not buying hers. She’s trying too hard. She’s putting John Blizzard on this spot, and making sure that we’re all aware she “barely knows” him.

Back at Erika’s, Teddi is telling her, “Lisa’s in a tizzy, and saying ‘Don’t say anything’. That’s when I realized I had been set up.”

Teddi goes on to tell us that she’s not lying, and if she was lying, why would she implicate herself? She admits she was petty in the beginning and that she was originally involved. Erika reminds her that she has the proof, but Teddi thinks LVP will still find a way to flip this on her. And she’s absolutely right. 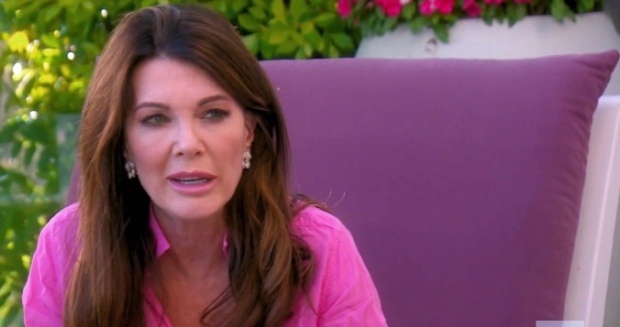 When we switch back over to LVP and John Blizzard, I truly feel like I’m watching a scripted scene. Lisa wants it to be clear that her words were misconstrued. She brings up the argument John Sessa and Ken had the night they found out Lucy was in the shelter, and I find it very convenient that LVP just happened to announce that she didn’t care who knew. John Blizzard then goes on to confirm that John Sessa said, “LVP doesn’t care, it doesn’t matter, tell whoever.” LVP states, “But then you implicate me.”

“I put words in your mouth that were not true and I will own that and I’m sorry for that.” – John Blizzard.

Oh my god, this is the biggest crock of shit I have literally ever heard. Give me a break! You honestly expect me to believe this? Why would John Blizzard lie to Teddi to begin with? He wouldn’t. He would literally not benefit from that in any way, shape or form. If anything, he would only hurt himself by going against her.

“Everyone at the center is upset that this is being flipped onto you,” he tells Lisa. I can’t even listen to this anymore, it’s unreal. Of course John Blizzard is going to back track now. He’s going to kiss LVP’s ass because she’s his boss, and this was planned all along, it just wasn’t supposed to come out. 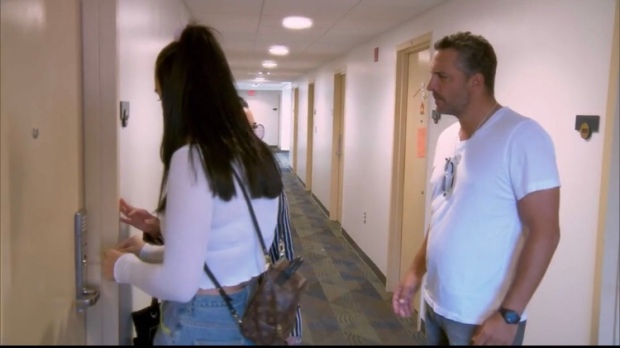 A break from Puppy Gate – we’re at The George Washington University, where Sophia is going to school. I am dying at Mauricio, he’s killing me in these scenes. He looks around the around the dorm room and goes, “You have gorgeous windows.” Lmao @ Sophia – “It’s just a regular window.” 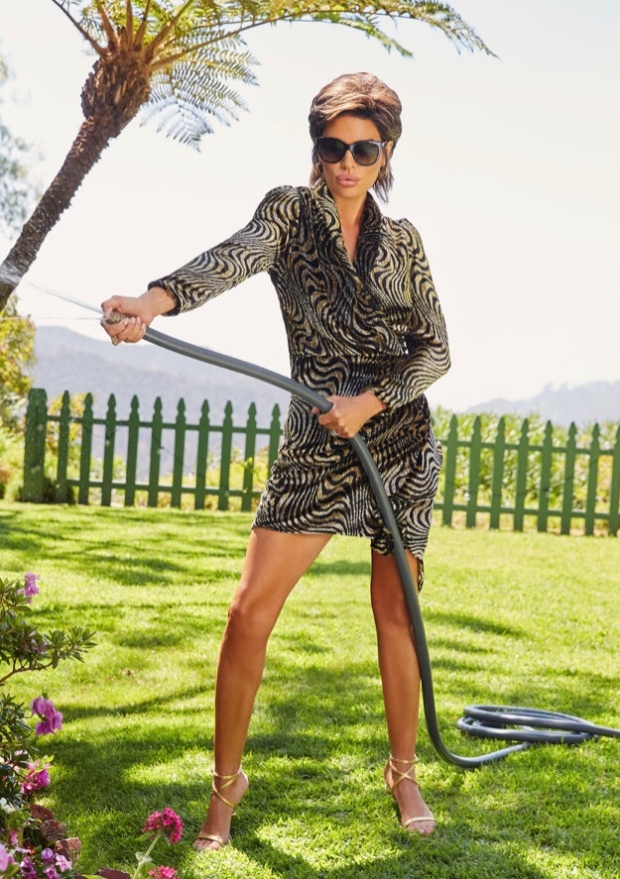 In BH, Lisa Rinna is getting ready to do a photo shoot for CVLUX Magazine. It’s a home and garden shoot, which Rinna finds amusing. “High fashion in the garden.”

In her confessional, Rinna tells us that LVP takes herself too seriously, and she needs to “own up to her mistakes.” Also, taking yourself too seriously ages you, according to Rinna. 😂 I know people have a lot of feels on Rinna, but I really don’t care – I love her. She literally owns everything she’s ever done – you can’t take that away from her. She’s living her best life right now. 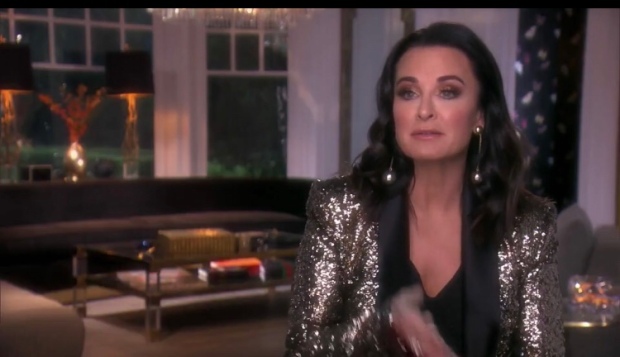 Teddi calls Kyle while she’s in DC to check on her. (Lmao @ Mauricio curling Kyle’s hair for her.) Kyle asks Teddi what she’s up to, and she fills her in on her conversation with Erika and how she’s feeling about LVP. Kyle wonders what LVP’s next move will be, and she also feels like she’s going to be forced to pick a side. She tells us that she’s just going to choose the truth. Preach, Kyle. I know I’ve had mixed feelings about Kyle in the past, but I’m Team Kyle again. I’m with her on this. 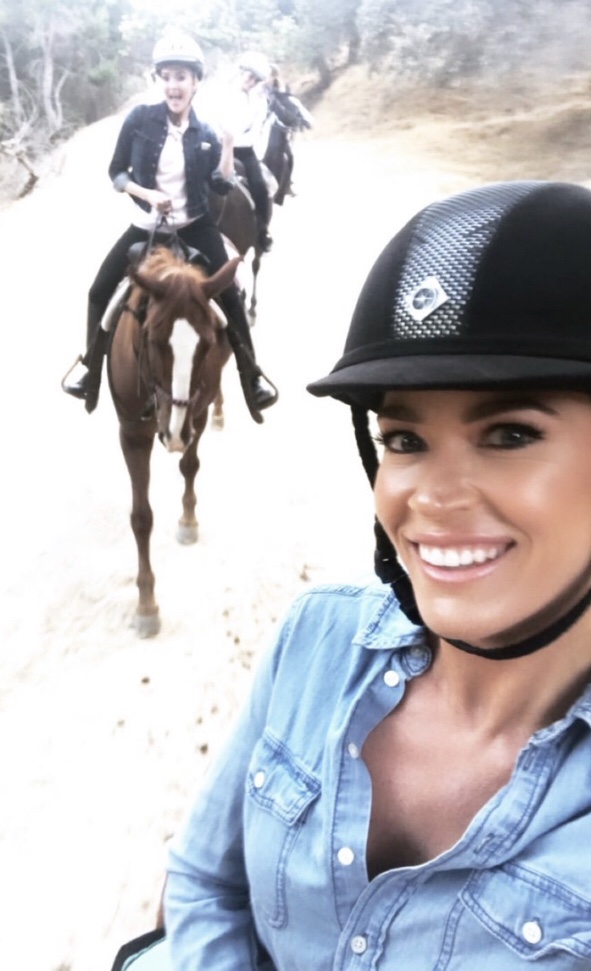 Teddi, Erika & Dorit meet up and go horseback riding. Then they have lunch and drinks at Viva Cantina, and they all just have girl talk and enjoy each other’s company. It’s nice. 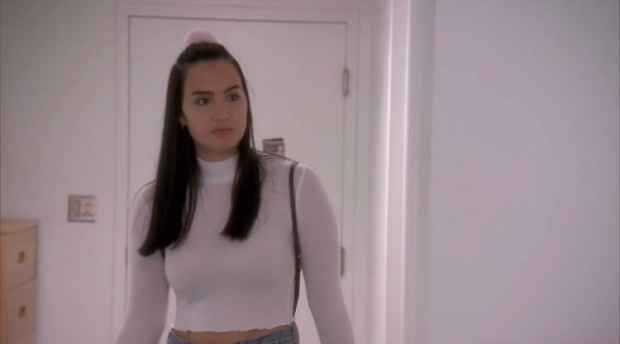 The Umansky family is having dinner at The Occidental Grill. I am dead at Farrah – Mauricio asks, “You came two days and checked a bag?” Lmao @ Farrah – “Yup.” Same, girl. 🙋🏼‍♀️

I honestly love this family. They’re so close, it’s so nice. ❤️ 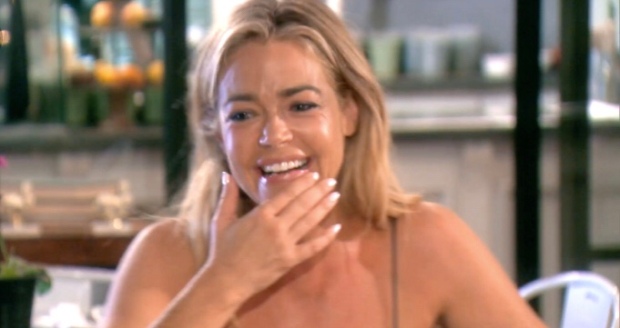 Denise and Aaron are having Date Night at The Sunset Restaurant. They’re talking about how his divorced is finalized, and how they want to get married. “The only free day we have is September 8th.” Denise is like, “You want to get married in 10 days?” And he’s like “Fuck yeah.” 😂❤️ Lmao I love it. Also, I seriously love that he’s into numerology – if you add up the date, it equals 8, which symbolizes infinity. “He does have this thing with numbers,” Denise tells us in her confessional. LOL I love it, I live for this shit. 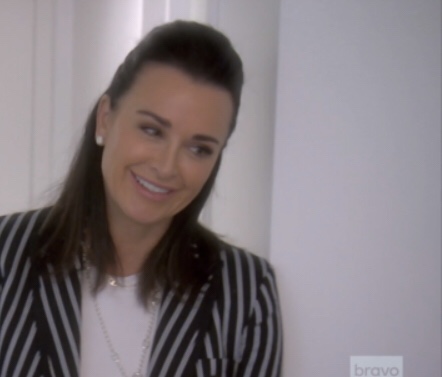 It’s the last day Kyle’s in DC, and they’re having breakfast at their hotel. Everyone is super emotional – why am I crying!? 😭 I feel for Sophia. I remember when I moved out of state when I was 19 – I was so nervous and anxious, despite being excited. I hate change, I cried the entire flight to Florida. Everything was fine, and Sophia will of course be okay, too. Moving is hard! And poor Portia! My heart broke when she was sobbing! 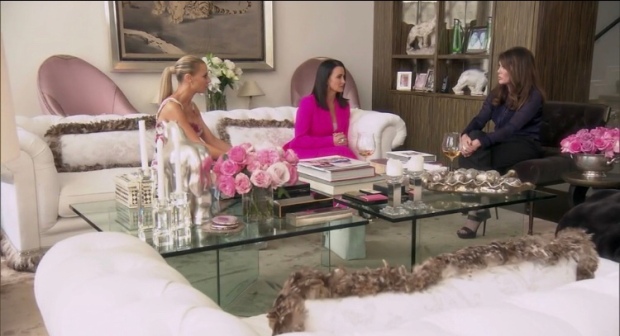 Dorit and Kyle are at LVP’s, because LVP wants to clear the air from The Bahamas. They sit down, and LVP starts off by saying that she felt she was accused of something she wasn’t guilty of. 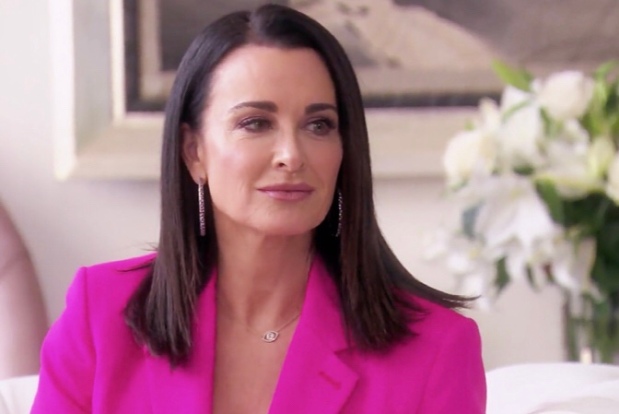 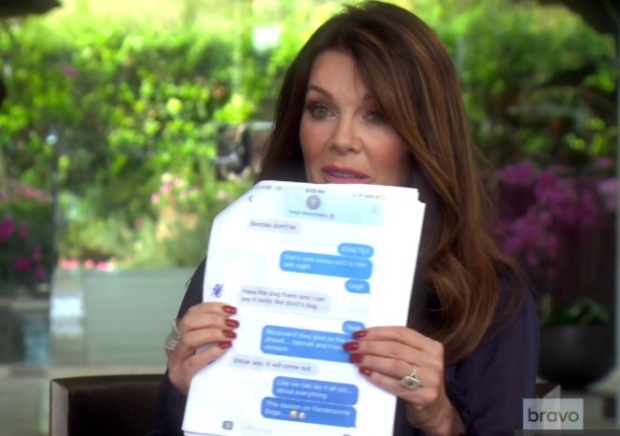 “I can see what you’re saying, Teddi’s hands are not clean in this, but I don’t think it’s fair to put this on her when she wasn’t alone in the situation,” Kyle tells LVP. In her confessional, Kyle tells us that she knows all of this – she’s seen Teddi’s texts, and Teddi didn’t orchestrate this, despite her involvement. 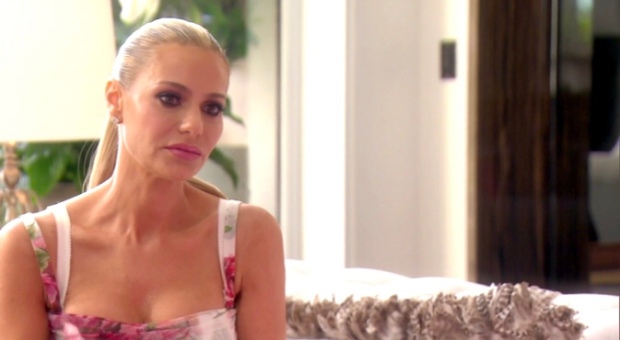 Dorit is realizing now that Teddi wasn’t as innocent in this scandal as she had originally believed. She’s definitely pissed, but she’s weary of LVP too.

And that concludes Episode 5.

Next week looks good – it looks like Teddi & LVP go head to head.

But – are we honestly going to talk about Puppy Gate all season? Cause I’m over this. And I definitely cannot watch 15 more episodes where we talk about it. I’m exhausted. 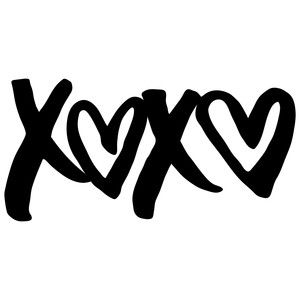